Get the latest news from SurreyInsider 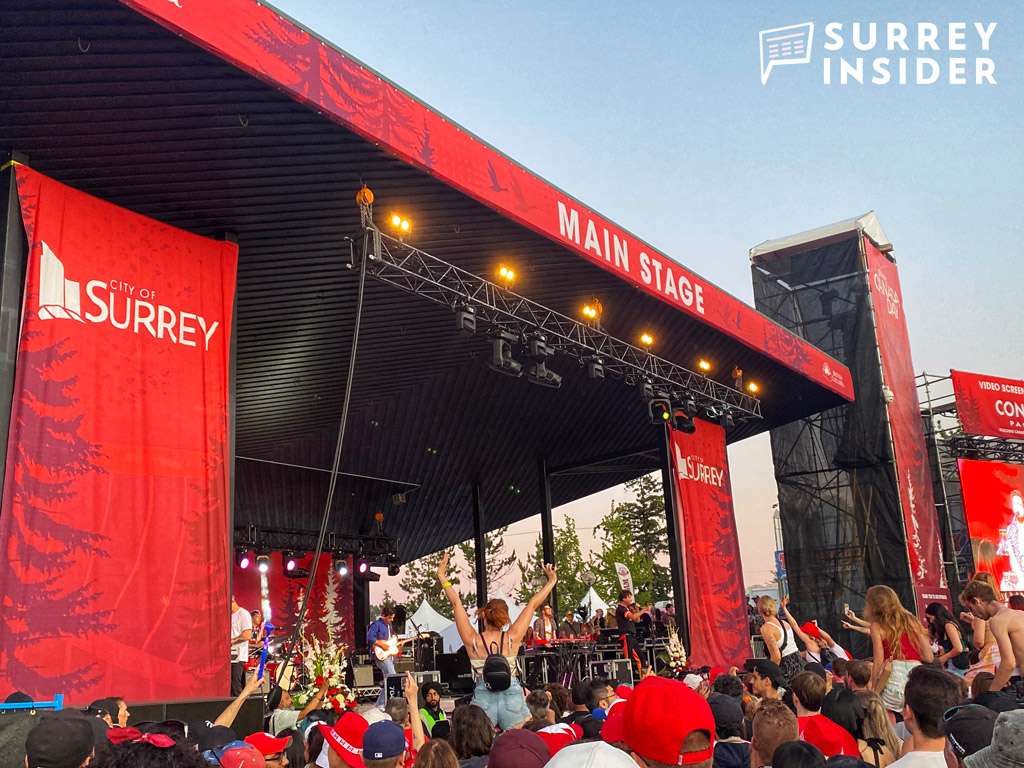 Happy Canada Day from your friends at Surrey Insider! Craig came by and snapped some reels for TikTok earlier in the day to beat the heat and the crowds, while Kreezus and I braved the snarling traffic to food trip and watch her neighbouring hometown heroes the Arkells perform.

The weather held up a lot better than it did for the previous weekend’s Surrey Fest as we strolled the Canada Day grounds checking out the huge selection of food and drink trucks, eyeing up the tasty treats others were munching on and sizing up the lines. Most of them weren’t that bad although one kiosk selling popcorn, sno-cones and other summery treats was jampacked throughout the evening.

Kreezus picked Kyu Grill, a small Canadian chain serving a mix of Hawaiian and Japanese flavours in a bun. They’ve been consistent award-winners in their home town of Manitoba and now have expanded to the Vancouver and Burnaby area.

We got a combo with an Okonomi Hero and Nori Kyu Frites. The Hero was supposed to be topped with noodles, which sounded intriguing and was the reason we ordered it. However they didn’t give us any. We heard that the burger place next door was out of almost everything, and Kyu had run out of some menu items as well, but since we were paying full price ($17.50 for the combo) they should have told us we wouldn’t be getting the item as described. As it was, the Okonomi Hero tasted a lot like longanisa in pandesal, so needless to say Kreezus loved it but I found it sickly sweet.

We agreed on the Nori Kyu Frites though, the mix of mayo, teriyaki sauce, shredded nori and a few spring onions was a satisfying snack.

This Kona Ice food truck just SCREAMS summer, so we couldn’t resist its radioactive-looking flavours. Despite the neon syrups Kona claims to be nutritious, and they do use stevia and pure cane sugar to sweeten their deal. It’s up to you how true that statement is, since they serve the shaved ice and you pump as much Vitamin C & D fortified sugar as you can tolerate into your cup. I did appreciate that they have instructions on how to use the handle of your spoon to pump the syrup to avoid getting everyone else’s cooties on your hands.

Between the crowds and having our hands full of food and drink we didn’t get a chance to snap a pic until we got back to our picnic blanket in front of the main stage, so the drinks weren’t quite as fluorescent by this point as the syrup was making its way to the bottom. The lime was incredibly refreshing and we were impressed by how long the ice lasted in the hot hot Canada Day heat. We tried to guess the mystery flavour and while Kreezus was convinced it was plutonium, I pegged it as a sasparilla-type flavour like rootbeer or Dr. Pepper. We didn’t end up finishing either despite them both being $5 smalls, and I’d say these are probably best left for the kiddos.

The Indigenous Village had its own stage featuring ceremonies and performances from the Native community. Sadly we arrived too late for these, although we did get to hear a bit of drumming while getting our bearings which sounded quite powerful.

Apart from the traditional teepees, a shabotan was erected with Every Child Matters flags flying from its poles. Shabotans were used for ceremonies, gatherings, and events. There were some tables set up inside for anyone who wanted to escape the crowds for a bit or contemplate our mistakes of the past and where we are headed in our healing journey as a unified country.

Surrey Canada Day also featured a fair full of rides and games. By the time I convinced my thrill-averse girlfriend to ride the ferris wheel with me (last time she went on one she actually threw up) they had stopped selling tickets. Probably for the best after all that food truck hopping!

By the time the Arkells took the main stage the Canada Day grounds were jam-packed. We circled the perimeter to sneak up as close to the stage as we dared without getting caught in a mosh to see these Hamilton, Ontario heroes up close and personal.

Singer Max Kerman brought the good vibes with plenty of hand-clapping, selfie-snapping crowd participation and energetic banter between party-ready earworm tracks. Their cover of Rick James’ Give it to Me Baby was my personal highlight, and not having paid any attention to this band before today they converted me to fandom by the time Canada Day was over.

And what better way to end a blissful Canada Day evening than with a bang? We heeded the warning shots and kept our picnic blanket set up for a perfect view of the fireworks going off front and center, and cheered not just for the fireworks but for our country, warts and all, and the many cultures that make up the mosaic of who we are. It may not be perfect and we all have a lot of work to do to live up to our united potential, but when I look at the state of the world today there’s no place I’d rather call home.

We’d like to hear your thoughts on how you think Canada Day should be commemorated going forward. We’ve seen it as a mournful time for the trauma of the residential school era, a celebratory time for the positive things our country is world-renowned for, and also as a time of protest for those who believe our personal freedoms are under attack. How did you mark Canada Day this year? How will you be spending it next year? Has your perception of our country changed over the past few years?

Whatever your beliefs, culture, or traditions, Happy Canada Day to you and yours!

Cloverdale Market Days is the largest open air market in the Lower Mainland, and it’s…

Get the latest news from Surrey Insider.